Autonomous driving and sensors are closely linked. Self-driving cars need a full range of sensors and technology to capture and interpret the environment all around the vehicle like ultrasonic sensors, image sensors, radars or LIDAR devices. So, what would happen if the integrity of these units is compromised by an external factor? Keeping sensors in good shape will be a matter of safety on the road. Winter sanding or salting, ice, dirt and even sun storms could compromise its proper functioning but perhaps you are not aware of another silent enemy of this important devices: tunnel washers.

As you probably have read before, it could be a good idea to avoid the use of washing tunnels in order to take care of the car paint. It would be better to trust in traditional washing techniques with neutral soaps, more friendly with the bodywork and the plastic parts of the car, and to use high absorption microfibre towels so no residue is left in the drying. You must also consider that certain soaps will strip the protective layers off of the paint. The paint is then exposed to the elements and it begins to deteriorate and fade. 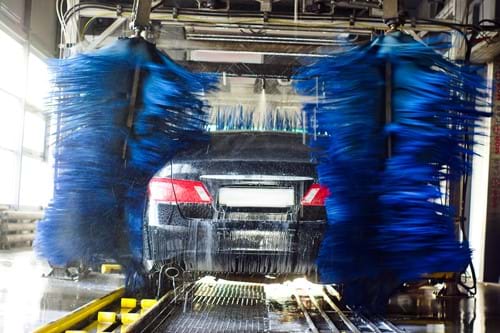 In any case, some abrasive brushes can be too aggressive for the paint of the car – and even produce micro-scratches - but they can also flutter the calibration of the sensors or even break them. Furthermore, soap residues or water stains could blind them. But worst of all: sensors could be broken when putting a self-driving vehicle through a traditional car wash.

But we should be aware that the surface of an autonomous car needs to be cleaned more frequently to ensure the proper work of all its sensors. Dirt, dust, insects, tar, bird droppings, water spots… could affect not only the bodywork: the sensors must remain free of obstructions. It´s a matter of safety on which any error in reading could lead to a misinterpretation of the surroundings of the car. It won´t cause necessarily an accident but it´ll affect self-driving capabilities of the vehicle.

Self-driving car companies such as Waymo (Google) have already experienced problems when it comes to maintain their fleet clean, and tunnel washers do not seem to be an option. Self-driven cars sensors definitely require a lot more care. This explains why some other companies like Toyota, Aptiv, or Uber in the US have confirmed the use of microfiber cloths along with rubbing alcohol, water or glass cleaner for the manual cleanings of their fleets.